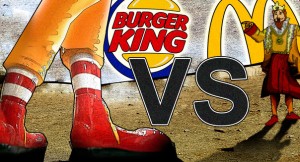 For generations people have been entertained by the epic battles of their time. Whether it was the Capulet’s and the Montague’s in Shakespeare’s Romeo and Juliet, the New York Yankees against the BostonRed Sox, or the Beatles versus the Stones, rivalries are everywhere. However, some of the most epic rivalries of all time are not in sports or music, but in business.

One of the biggest rivalries in business is not likely to be classified as a rivalry anymore, but once considered one of the big ones, is the fast food battle between McDonalds and Burger King. While the question these days might be more along the lines of Chipotle or Moe’s, McDonalds and BK’s low cost burgers and fries have long since been a topic of discussion. Both companies have used marketing efforts to solidify who the true champion of fast food is.

It is clear these days that McDonalds has become the epitome of fast food, but ultimately the industry has been hurt significantly due to the low nutritional value of classics like the Big Mac and Whopper. The result of their competition truly is nothing less than what can be called “cheap fast food wars”. For years the two companies have very publicly rivaled each other, but both have faced road blocks, because at the end of the day how many original ways can you make a burger? The two companies have tried many ways to differentiate themselves, and their menus. Burger King tried to stand out with a partnership with Seattle’s Best Coffee and other offerings like sea salt fries, while McDonalds launched the All-Day breakfast menu and incorporated healthier sides like apple slices. But the “cheap fast food wars” remain. Last summer Burger King proposed an end to the rivalry in the form of an open letter that was printed in the New York Times and the Chicago Tribune. The proposition? A collaboration of the two chains most popular burgers in what would become the McWhopper. The proposition was in conjunction with Burger King’s support of the cause One Peace Day, an organization that was lobbying to create an International Peace Day. Turns out however, McDonalds wasn’t too into the idea. CEO Steve Easterbrook responded to the letter on Facebook and shut Burger King’s McWhopper dream down.

In 2016, both BK and McDonalds are launching very similar promotional campaigns including the 5 for $4 meal deal at BK and McPick 2 at McDonalds. While it seems clear that McDonalds is the winner of this rivalry, with more stores and recognition across the world, perhaps Burger King can climb up from the ashes. Who will win? Only time will tell.

Next, among the most famous business rivalries of the 21st century is that of Mac versus PC, or rather Gates vs. Jobs.

The “I’m a Mac” advertisements that aired in the early 2000s were only the beginning. For years Gates, and his Windows technology, which he wrote the code for himself, performed far better than Apple. That is until the iPod, (followed by the iPhone and iPad) revolutionized our world forever. 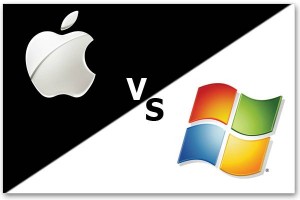 These two men essentially are night and day, coming from different backgrounds and having different skill sets. Perhaps what ultimately led to Apple’s success was not the technology itself but Jobs’ natural ability to market it well. He understood style and message, and how to generate excitement about Apple’s products. Who is the real winner in this rivalry? Since you can’t go anywhere without seeing and iPhone, I’m going to have to say Jobs has this one.

The ultimate rivalry in business however comes from a small aluminum can. The question is… Coke or Pepsi?

Some would argue they are the same thing, sugary water that’s not very good for you. Others live and die by their brand. The question of Coke or Pepsi has divided the world; everywhere from restaurants, schools, to supermarkets, and even the Superbowl Half Time Show. The brands have become a part of our culture with pop culture icons from Michael Jackson to Beyonce, even Santa Claus himself has taken a side. While Coca-Cola arrived on the scene first, Pepsi-Cola would follow and fight with all they had to try and be named the best cola.

For years, Coke refused to acknowledge that Pepsi-Cola was even a threat, until Pepsi started inching closer to the top during the Great Depression. Often times referring to each other as “the Enemy” or “the Competition” these rivals weren’t afraid to share their feelings in the markets. The cola wars have led to some of the most memorable and important moments of advertising today. Coca-Cola’s “share a coke” campaign, which featured 1,000 popular names on the cans and bottles of Coke, Diet Coke, and Coke Zero was a huge success as Coca-Cola was able to achieve a 19%+ year-over-year growth, the largest year-over-year growth in 20-ounce packaging history. Meanwhile, PepsiCo countered the campaign with their Pepsi Pass loyalty program (watch the commercials here). Offering incentives has long been one of Pepsi’s marketing tactics. In the late 1990s Pepsi’s campaign “Drink Pepsi, Get Stuff” encouraged consumers to drink Pepsi, save the bottle caps, and earn rewards. The successful campaign even helped Pepsi dominate the Atlanta markets (where Coke is headquartered) during the Coke-sponsored Atlanta Olympics. 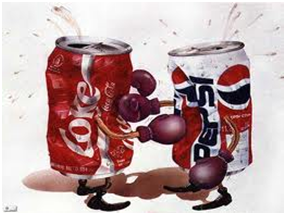 In 1996, Fortune declared that the cola wars had ended after Pepsi successfully overtook Coke’s sales, but couldn’t hold the lead for long. These days both companies face difficulties in the changing markets as many consumers choose not to drink soda due to health concerns. Both companies also seemed to miss out on the opportunity with energy drinks, maybe you’ve heard of a little something called Redbull? Regardless, the companies remain strong and have instead shifted their focus to healthier drinks and food products. But the question still remains, Coke or Pepsi?