Would you believe me if I told you that a team made up of five SJFC accounting students recently came in first place at a national tax competition? Well you should, because the weekend of January 15th saw them do just that at the Deloitte FanTAXtic Competition held in Dallas, Texas.

As the team began preparations a mere four months ago, they delved into the tax world and consumed themselves with information ranging from domestic and international tax to mock tax cases – preparation that surely paid off. That said, one can only do so much and the case competition forced them to take that knowledge and apply it to a real-world situation, which they were given upon their arrival in Dallas.

Given mere hours to prepare, the team stepped before the judges the following morning and delivered their solution, which was described as “a flawless presentation” and “the best presentation they’ve ever seen.”

As if the event couldn’t get any better, a familiar face and fellow Rochester native greeted them at the award dinner. The world-renowned soccer star and famous Olympian Abby Wambach delivered the keynote speech and congratulated the team on their outstanding and admirable efforts. 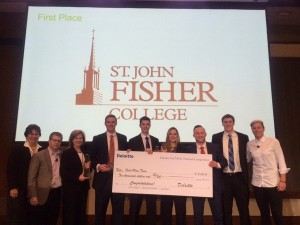 1,500 miles are just a small price to pay to accomplish something that no SJFC students have done before; let alone accomplish something that few beyond the confines of the SJFC community even thought possible: beat schools with ten-fold more enrollment, funding, and recognition. This triumphant victory not only brings Rochester and SJFC to the forefront, but it showed that SJFC, an institution of less than 3,000 undergrads, can, and will continue to compete and come out victorious on a national level.