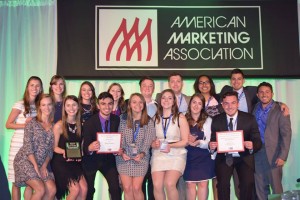 After several busy and fun-filled days in New Orleans, the conference was coming to a close. It culminated with an awards banquet, which included a tasty meal and allowed all of us attending to come together and celebrate all of our hard work.

Around 5:30 PM, we strolled into the banquet hall excited and hopeful at the prospect of being recognized for our efforts throughout the year and over the last few days.

We’d won 1st place for Chapter Communications in the Exhibit Competition on Thursday, so we had our fingers crossed for a few more functional awards. And it worked! We were recognized for Outstanding Chapter Planning, an honor we’re very proud of.

Several members of SJFC/AMA further proved themselves by competing in individual contests throughout the week.

First, Erin McNamara placed 3rd for her efforts in the ABC International Sales Competition. This competition consisted of contestants being given a scenario and ten minutes to identify the buyer’s needs and secure a second meeting. The second round entailed closing the sale (for ABC Supply Company) within 20 minutes.

Next up, Aaron Guarino won Honorable Mention for his efforts in the Aerotek Perfect Pitch Competition. This competition entailed Aaron having to give a 30-90 second elevator pitch to representatives from Aer 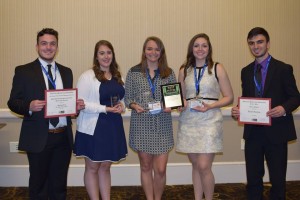 otek. (Elevator pitch: what you would tell someone about yourself if you wanted to make an impression).

Last, but certainly not least, Co-President, Gina Godlewski, took home the honor of being named Student Marketer of the Year. Out of the 1,500 of students that attended the conference, one student from each chapter was nominated – and our very own was selected. It was an exciting achievement for both Gina and SJFC/AMA.