Marketing Week connects over 400 students to professional development opportunities in the community!

This year we celebrated Marketing Week from October 16th – 20th , 2017 attracting more than 400 students to interact with professionals from 20 different local and national companies through panels, workshops, and speakers.

There were 12 different events inviting current and previous members to come together and interact with 20 different companies including Wegmans, Constellation Brands, and Paychex. The events covered topics from rebranding, to pharmaceutical sales, providing students a week of networking opportunities from the best in the business.

Monday
We started the week off with free breakfast on campus for students, followed by a branding workshop led by Tommy Brunett, the founder and president of Iron Smoke Whiskey. The day finished off with a presentation from Teagan White, marketing manager from JN White, on how she turned stagnant sales by rebranding.

Tuesday
Tuesday was headlined by Heath Gebell, a senior marketing manager at Wegmans, talking abut the development and execution behind the companies new launch of “veggie purees”.  Tuesday night featured an alumni panel including Allison Taylor from Butler/Till, Gina Godlewski from Roberts Communications, and Matt Delgado from Constellation Brands, talking about where their degree in marketing has led them in their careers.

Wednesday
The week moved on to a talk from Tina Bloom, Director of Sales for Assurex Health, uncovering the myths behind the stigma of pharmaceutical sales, followed by a “How to Networking “ panel and speed networking event. Professionals from Manning & Napier, Butler/Till, Launch Solutions, Mason Marketing, Truth Collective, and the Rochester Chamber of Commerce came together to teach students the best networking practices and put their skills to the test.

Thursday
Student’s sales skills were literally put to the test for Aerotek’s Perfect Pitch competition. Students were given 60-90 seconds to pitch themselves for a sales recruiting job with Aerotek in front of judges from Aerotek, Northwest Mutual, Constellation Brands, First American Finance, Paychex, and WorldLeaders. The day ended with a club bonding movie and ice cream sundae night.

Friday
To wrap, students went on a marketing agency “crawl,” touring Roberts Communications, Partners + Napier, and CGI Communications. Friday night, students competed against each other in a Kan Jam tournament. 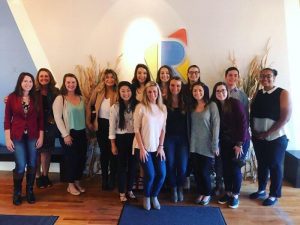 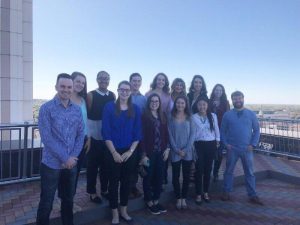 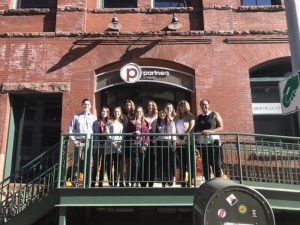