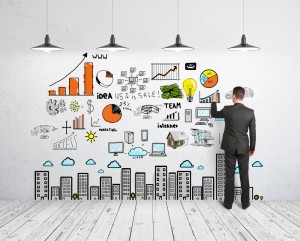 Marketing /’märkediNG/ n. is the action or business of promoting and selling products or services; whether that means sporting goods in today’s modern landscape or food items like grain in primitive societies hundreds or thousands of years ago, marketing, in some form, has been around forever.

So why, regardless of the time period, has marketing played such an important role in society? Because it’s impossible NOT to market.

The way we know marketing today began in 1450 with the invention of the printing press, which allowed, for several hundred years, printed advertising to be released via movable type, i.e., an extremely time-consuming and tedious process. That said, for the first time, mass printing was possible, and companies could spread their messages far and wide.

For the next roughly 200 years, printed advertising remained very well traditional, and it wasn’t until the 1740’s that printed advertising was taken to the next level: Magazines in Philly. Published for the first time in 1741, The American Magazine was released and covered topics such as morality and history; however, the magazine was short lived lasting only three months. Regardless, The American Magazine paved the way for an incredible journey and a multi-billion dollar industry.

Marketing remained fairly traditional for the next couple hundred years, but in the early 1900’s, it took an increasingly technical (and futuristic) turn, this time, in the form of the radio and television. Within a two-decade span, both radio and television advertising consumed the world, precisely American’s attention for the next several decades.

By the 1980’s and 1990’s, technology was picking up steam and computers and mobile technology were  becoming an increasingly significant aspect of modern society thanks to companies like IBM and Apple. Over time, search engines, blogs, inbound marketing, and social media would emerge and ultimately create an atmosphere that was conducive to a new and increasingly active customer experience.

Now as we are quickly heading into the future, where do you think marketing will go?