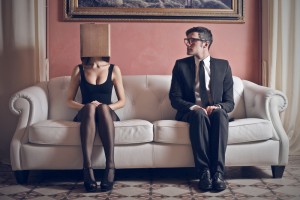 In the professional world the phrase “it’snot what you know, it’s who you know,” gets tossed around a lot. For introverts, getting to know people in a networking setting isn’t always the most comfortable situation. But, whether you like it or not, putting yourself out there and making connections is one of the best things you can do for yourself and your career. If you’re an introvert, here are a few tips to make networking a little easier.

When presented with the option to attend a networking event, there are two options. You can either say “yes” or “no.” If you’re an introvert you might rather get eaten by a lion than shake hands and make small talk with a bunch of strangers, but push yourself to get outside your comfort zone. The more you do it, the more comfortable you’ll get. While it might feel awful the first few times, getting more familiar with the handshaking and introductions will ease some of the worry later down the road.

Ease some of your own social anxiety and plan ahead. Expect that you’re going to be exchanging business cards and resumes so pack plenty and be prepared to hand them out. Since it’s likely that you’re going to be making conversation with strangers pick a few easy topics to keep in your back pocket as conversation starters. Having these starters already in your head means you won’t be feeling like you have nothing to say. Finally, plan to be uncomfortable. If you accept that you’re probably going to be a little (or a lot) bit stressed in the situation you’ll be pleasantly surprised when it goes a lot better than you thought it would.

The more you push yourself to get out there and network, the easier it will become. So start with baby steps, like going to local events or attending an event with a friend. Every time you push yourself out of your comfort zone, reward yourself. Treat yourself, whether it be a nice dinner or cozying up on the couch after a networking event, do something that makes you feel good in exchange for doing something that maybe didn’t feel so great.

Whether you like it or not, there really is no way to get around networking. So make the most of it, embrace it for what it is, and see where your connections will take you.